The Cabane des Aiguilles Rouges (2810m, 9219ft) is the goal of a second excursion that I propose to you starting from Arolla. Whereas one can class the climb to the Cabane de Bertol as a demanding undertaking in very high mountains, this hike, on the western side of the Val d'Arolla, is less extreme. The descent via Lac Bleu makes it possible to do a circular hike of about 5 hours.

1 - In Pra Gra, with views of Mont Collon and Pigne d'Arolla

To reach the starting point, climb the 2-3 zig-zags of the road which passes through the village of Arolla as far as a small ski lift "Guitza" (car park). Follow the ski piste (suitable for motor vehicles but without any traffic) leading to Pra Gra. After 45 minutes of gentle ascent, one passes under the last pylon of the ski lift. A little further on, take the track obliquely on the right and above all, do not to continue in the direction of the glacier otherwise you will find yourself at the Pas de Chèvres or the Col de Riedmatten. The junction has no sign post. Alternatively, at the first hairpin bend on the ski piste above the car park at Guitza, there is an old wooden sign that points to Cabane des Aiguilles Rouges, 2:30. This path leaves the ski piste and takes a more direct route to Remointses de Pra Gra.

Via the ski piste, Remointses de Pra Gra (2479m, 8133ft) is reached after 1:15. In this way, 400 meters of ascent were achieved without really noticing. There are some old mayens, the Hérens breed of cattle and a magnificant view of the Pigne d'Arolla and Mont Collon.

Soon after having left the pastoral mountain pastures of Pra Gra, one enters a world of moraines, torrents and nêvé. In contrast to Bertol, where the glaciers still unroll their tongues for several kilometers, here they seem to be in agony. The glacier des Aiguilles Rouges has only kept one glacial plateau huddled up under the walls of the Aiguilles Rouges of Arolla. One can see the path passing this side of the glacier and going up the last escarpment where the hut is perched. 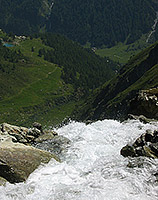 2 - Crossing of a wild river. Far below, the Lac Bleu

One crosses this rocky cirque without really gaining height. When crossing a stream, the turquoise water of the Lac Bleu can be seen far below. Cross some large boulders that have fallen from the mountain, then a section secured by chains and finally a last section of ascent leading to the hut. The watch shows a time of 1:15 from Remointses de Pra Gra, hence 2h30 in total for this rather easy ascent.

The descent via Lac Bleu makes it possible to make a circuit, which is always better than a dumb descent by the same route. But that other route is much less comfortable. That puzzles me: how two routes with the same difference in height can be perceived one like exhausting penance and the other like an easy stroll. Briefly, here is the description of the descent...

First of all, one climbs a few tens of metres more for a better descent from this promontory. Having reached the small valley of Crosayes, one must cross a rather wide river without the aid of a bridge. The heat of June 2003 undoubtedly transformed a trickle of water into an unusually fast torrent. One now descends across the mountain pastures of Remointses du Sex Blanc. The path requires care because it is uneven, it descends steeply and it is sometimes narrow, especially when approaching the Lac Bleu.

3 - In the barren mineral landscape just below the cabin

A small and pretty tourist lake accessible on foot from the valley (Satarma or La Gouille), the Lac Bleu will probably be busy when you arrive there, about 1 hour after starting the descent. One can choose to go down to the road and to travel by bus or to take the path which links Lac Bleu to Arolla. As one is close to the altitude of Arolla, the return to the village seems nothing more than a formality. The Rother Unterwallis guidebook is far too optimistic and speaks of 45 minutes, whereas the sign at the lake indicates 1:10. In fact, tired and cursing the successive ascents and descents, this "formality" will take us 1:30!

To be frank, this route from the Lac Bleu to Arolla, I found as unpleasant to walk as that of Loriaz to Emosson for the Col de la Terrasse, Lac du Vieux Emosson, Lac Vert hike. The narrow path crosses the river by a steep descent, followed by a bridge, then an equally steep ascent. It crosses a rather dense forest under wet cliffs, while continuing its vicious game of ascents and descents. There are even chains for a few meters. Take care in the event of rain! It finally emerges from the forest and arrives in the village of Arolla slightly below our starting place, the carpark of the teleski "Guitza". Duration of the descent (for two demotivated hikers): 1:00 as far as the lake and an additional 1:30 from the lake to Arolla.

Alternatively, after crossing the bridge in the forest, there is a path junction where both paths are signposted to Arolla. The higher path (described above) continues straight on but the left turn is a good path that descends almost to the road at 1840m near Pramousse. From there, one can either continue on the path that climbs back up to 2050m or cross the road and walk up the valley to Arolla.