This hike took me to the far reaches of Val Ferret, as far as the Fiorio bivouac (2729m, 8953ft). Owing to the solitary, autumn-yellowed alpine pastures and the peaks of the Mont Blanc range in the background, I felt as though I were in Patagonia!

1 - On the way to the Grand Col Ferret

2 - The Bivacco Fiorio, on Italian territory

Because of a "mistake" made in direction from the start, the hike turned out to be much more interesting than the one that I had planned to do, which was to:

as found in the Rother guidebook.

Instead, what I did was to:

You choose which of the two you want to do. The second itinerary - the one that I am about to describe to you in detail - is longer but, being a circuit, far more interesting. Also, that "mistake" allowed me to reach Grand Col Ferret, from where the spectacular Grandes Jorasses are visible (see photo 1); from Petit Col Ferret, they are not visible. Definitely less pleasant were the 30 minutes up the road at the end of the hike, to return to the parking.

3 - On the summit of Tête de Ferret

My version thus starts out near the bridge over Drance de Ferret, at an altitude of 1755 m (6794ft). On the other side of the bridge, a road suitable for motor vehicles zigzags its way up to the farm at La Peule (2071m, 6795ft). To avoid the unpleasant stretch that I mentioned in the previous paragraph, I should have parked close to the village and hiked up to Pramplo and then La Peule. If that is what you opt for, a detailed map will be of more help than I am.

Once you leave La Peule, the road becomes a path that is wide and strangely even but relatively steep. At summer's end or in the autumn, the pastures below La Dotse are no longer green but very yellow. And then Les Grandes Jorasses (more precisely the Pointe Walker) suddenly appear - and the contrast between vertical rock walls and horizontal flat land is breath-taking. Patagonia... in Switzerland! Furthermore, if you are sensitive to the colour palette, you will be overwhelmed: grey like rock, yellow like grass, red like the dried up bushes, deep blue like an Autumn sky.

That up-lifiting beauty will remain with you all along the fairly easy walk to Grand Col de Ferret (2537m, 8323ft), which we reach after 2h 20min. Beyond the col (pass) is Italy, where we will venture a little later. For the time being, however, the aim is Tête de Ferret. A footpath not on the map but pointed out by the people at the farm at La Peule takes you there. It is steep but easy and takes only 15 min.

You need not choose this variation - a path on Italian soil links the 2 Ferret cols horizontally. But why deprive yourself of an even vaster view (see photo 3)? 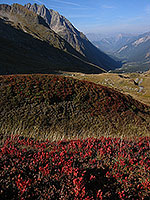 From Tête de Ferret, hike back down via the western ridge. On this side, the path is good but the rocky ridge is less easy-going than the grassy slopes on the southern flank. 30 min. later, you reach a secondary col (point 2539) and then the Fiorio bivouac junction. At this point, you are almost on Italian soil. Funnily enough, you know when you are on Italian soil as soon as you notice that the signs giving directions have disappeared or been knocked down and several nearly unnoticeable paths are nevertheless parallel. Do not let this throw you off: pursue towards the glacier Pré de Bar, which is now very near.

You access the Fiorio bivouac on a typical high-mountain path with scree and unstable boulders. The cairns appear to mark out several different ways but continue to follow them. 45 min from the junction and you reach the place where the Fiorio bivouac is found. Get a good look at the glaciers and high peaks: Aiguille du Triolet, Mont Dolent, Pointe Allobrogio. The small cabane made of sheet metal with a round roof is the old bivouac, not, as I thought when I had arrived, the public lavatory; the main, newer bivouac has a roof made of sheet metal but walls made of wood.

The hike back down takes 2 hours and 30 minutes: 30 min to get back to the junction; 5 min to climb up again to Petit Col Ferret; 90 min to descend La Combe des Fonds and make your way through the cows at La Léchère. Below you are the bridge and the car park near the river; you will have to put out another 25 min along the Val Ferret route if your car is parked at the end of the road at La Peule. A word to the wise...