The Vallon de Réchy is a small wild paradise located between the long valleys of Hérens and of Anniviers. This itinerary allows you penetrate this hollow via the Col de Cou, walk along its western slopes to the Lac du Louché, and come out of it via the Pas de Lovégno. 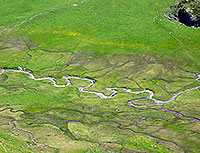 The wealth of the biotope and the quietness of the vallon are remarkable for a place that is so close to civilisation. Sion is only 10 kilometres away and the motorway of the Vallée du Rhône stretches only 7 kilometres north of the Ar du Tsan. Closer to the vallon, there is no lack of ski facilities: to the east are those of Grimentz and to the northeast those of Verccorin. Fortunately, in this vallon surrounded by high flanks, you feel far from all that and everything is easily forgotten.

You start off from the alpine pastures of Mase, from a road that leads to Tsa Crêta and the farm-refreshment bar of La Louère. At the edge of the forest, this road becomes a no thoroughfare, which means that it is time to start walking. 30 minutes later across the pastures of the Arpetta, you reach La Louère. The web sites Alpage de la Louère (formerly alpmase.ch) and www.mase-info.ch explain in detail how to get to the mountain pastures. Do not consider consulting their information a luxury because, in our case, we parked far too low, dumbfounded by a sign that read "interdiction de circuler" (no thoroughfare) posted in front of a wide-open gate.

Without a vehicle, you will probably have to begin your hike at the village named Mase, which lengthens the walk a lot. As I do not know by how much it is lengthened, I recommend that you contact the people who run the web sites mentioned above to be sure that hiking from Mase or Saint Martin is actually possible. Otherwise, you may have to leave from Vercorin (Crêt du Midi) to reach the Vallon de Réchy.

3 - Le Louché and the tower of La Maya

Two paths set out from La Louère: one, on the left, leads you to the Col de Cou; the other, on the right, to the Pas de Lovégno. Mr. Pannatier judiciously suggested to us to hike from the Col de Cou to the Vallon de Réchy and then to the Pas de Lovégno. It is, in fact, easier that way, as the Col de Cou (2529m, 8297ft) is reached in less than an hour without sweating it out. Along the path, signs mention the Ar du Tsan - first 1 hour and 40 minutes away and then 1 hour and 10 minutes away. But we did not go to see that marsh of great ecological importance because we would have had to hike back down more than 300 metres. Another hike will provide us with that opportunity. At the Col de Cou, we were content to take a few steps on the slope, just to be able to admire from above the meanders of the river La Rèche. Then we backtracked to the path that sets out to the right of the col under Mont Gautier.

Between the Col du Cou and the Lac du Louché, our next stop, the altitude varies very little - it is an easy walk about 2 hours long between 2450 and 2550 metres. The Becs de Bosson and the Maya are reflected in the Lac du Louché, one side of which was still covered with ice. We continued our hike toward La Maya, a mountain whose shape is so characteristic. A steep but brief (only 15 minute) ascent hoisted us up to the Pas de Lovégno, which is the exit door of the Vallon de Réchy. Beautiful view of the high peaks from the end of the Val d'Hérens, above Arolla.

The paths of this itinerary are absolutely pleasant to walk along and even the descent is a pleasure. This is not always the case, mind you. There are several paths that rush down the Alpe de Lovégno - be sure to stay on the right. Remember that to return to the point of departure, you have to take a northwest to La Louère and Mase, not to Saint-Martin!

30 minutes after leaving the col, you approach a little hump (Les Rechasses, point 2522 on the map). That is where the path makes a sharp right turn. And then you find an alpine road near a chalet decked out with red shutters and a cross on it. There is no sign anywhere, but you will soon find yourself back on the paths that you walked along in the morning. You walk down this road and, 15 minutes later, reach the refreshment bar of La Louère.

For your information are the following timetables taken from my own notes:

On this hike, you get only a taste of the Vallon de Réchy. The distance that we covered kept us well above its central part and far from its supposedly very interesting marshes. Another hike is imperative to make up for such a loss - for example, by starting off from Vercorin and following the bisse (irrigation channel).